Driving through Mount Vernon at lunch, I passed by one of the really classic buildings in Baltimore, and remembered that I'd seen a mention of Edward Palmer renovating the building in about 1923. Of course, I had to drive around the block to get the perfect view of the building. 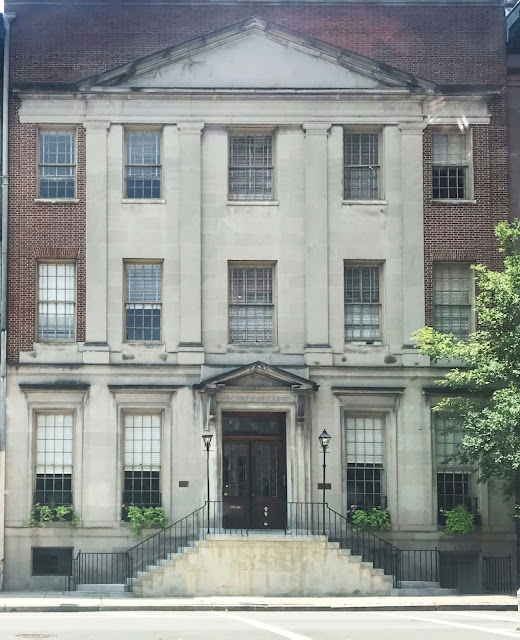 No. 702 Cathedral Street has an interesting history. It was designed by Neirnsee & Nielson for Congressman William J. Albert who was head of Sanity Sanitary Fair, an early version of the Red Cross.* However, another source says the building was designed by Louis L. Long. According to Jacques Kelly, the house had secret panels, a curving staircase, and grand salons. It also was host to special guests including President Abraham Lincoln and Oscar Wilde.

From Albert, the house went to John Irving Griffiss and his wife, Margaret Abell, who was part of the wealthy Abell family which published the Baltimore Sun.

In 1923, the property was acquired by Dominique Arrolbia, then proprietor of Marconi Hotel & Restaurant. His plan was to open Maison Domenique as a place for dining and dancing, much to the horror of the residents of the quiet Mount Vernon Place. They were already up in arms about the Severn Apartments which towered over the buildings on the square. 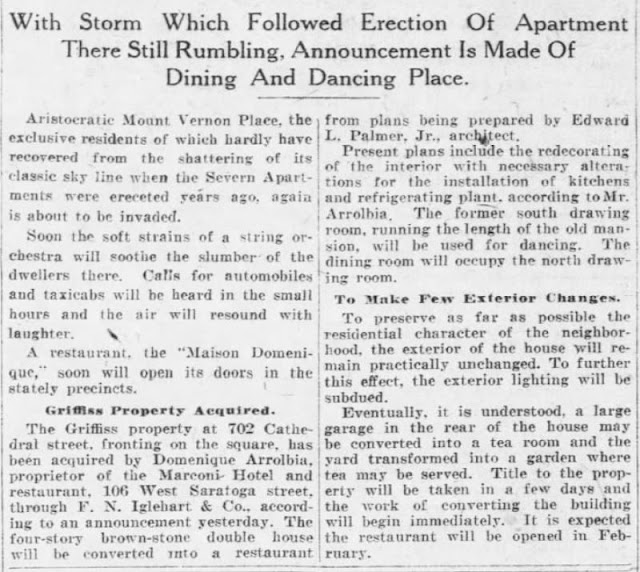 But the Sun said, "The soft strains of a string orchestra will soothe the slumber of the dwellers there. Calls for automobiles and taxicabs will be heard in the small hours, and the air will resound with laughter."

Edward Palmer was engaged to prepare the plans, which included redecorating the interior, and installing kitchens and a refrigeration plant. The south drawing room, which ran the length of the building, was to be used for dancing and the north drawing room was for dining. The large garage in the rear of the house was to be converted to a tea room and the yard would become a tea garden.

Apparently, Maison Domenique never came to fruition and the building was sold to the Christian Science Church, which demolished the garage and garden, and added an 400-seat auditorium, complete with a massive 811-pipe organ.

After the Church closed, Agora Publishing bought the building to add to their portfolio of properties in Mount Vernon. It's currently used for their Health Sciences Institute. 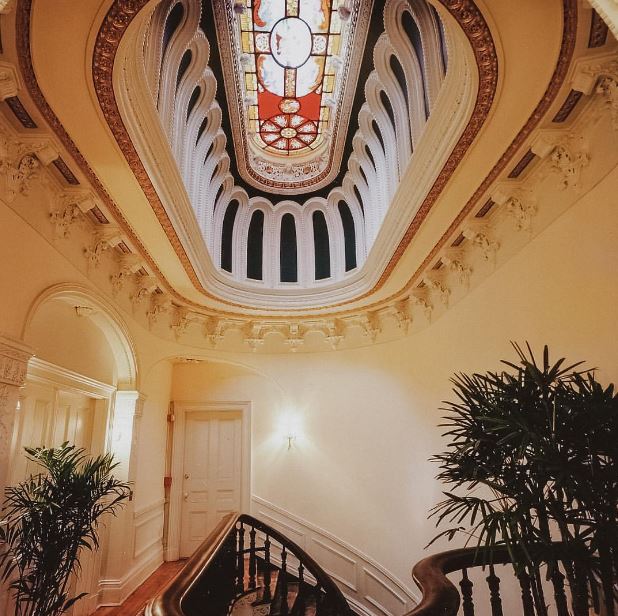 They restored the building to its former glory and use it for office and meeting space.

*Someone told me that 702 was not designed by Neirnsee & Nielson, and not designed for the Alberts. But since I've seen nothing that indicates otherwise, I am leaving this here.
at July 09, 2019