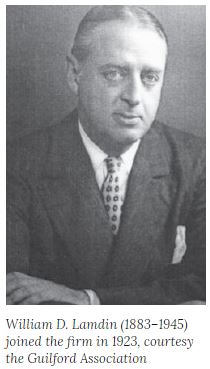 Background
William D. Lamdin was born in 1891 in Baltimore, Maryland and died on May 31, 1945 in Baltimore.

Education
He was educated in the city schools (Baltimore), graduated from Baltimore Polytechnic Institute in 1909 and with a degree in Architecture from Cornell University in 1913

Career
After beginning work as draftsman in the office of Wyatt & Nolting, Mr. Lamdin remained with the firm until the early 1920's when he started practice under his own name, later formed a partnership with Edward L. Palmer, Jr.

Devoting his time mainly to residential work, he designed for his clients homes distinguished for refinement of taste and simplicity of plan. He was also interested in civic matters, and had served on the Baltimore City Planning Commission.

Lamdin learned a lot from French architecture during his tour of duty in World War One.