I drive by St. Paul Court almost every day on my way to work, after picking up my daily bagel. In recent weeks, I have noticed that there is some work going on at the building. Scaffolding has gone up and dumpsters are on the street.

When I went to pick up lunch the other day, I was able to snap a picture. 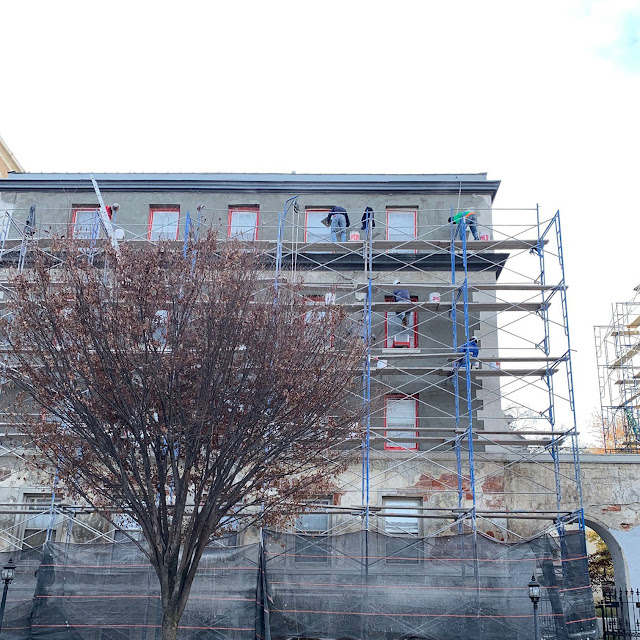 It looks like the building is being re-stuccoed. Workmen have taped off the windows and are chipping off the old (and probably original) stucco. They are re-applying the stucco and re-painting it. I am hoping they leave the original details alone. I guess after nearly 100 years, that it was time for a facelift.
UPDATE:
I drove by recently, and they've done a lot more work. It looks like they are keeping the details. 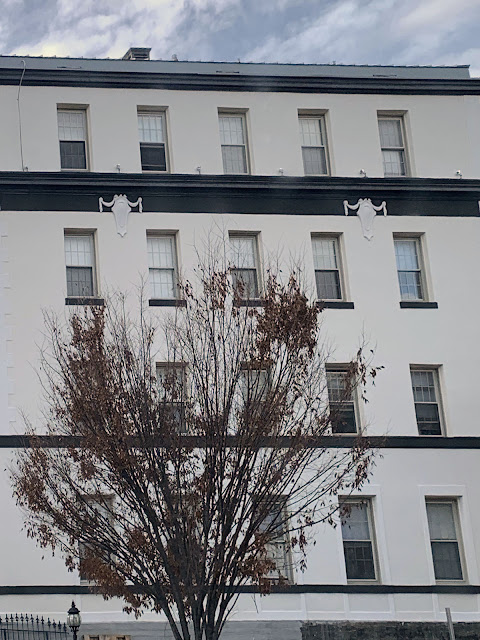 The building will look great when they are finished! Stay tuned!
at November 25, 2020 No comments:

Update: The house settled earlier this week and was purchased for $455k, which was $125k above the asking price. Hopefully, the new owners will respect the architecture of the house.

This house at 4604 Kerneway was on the market for about a week, with more than 15 showings scheduled each day, a massively successful open house on Saturday, and then offers for the house due on Sunday evening! 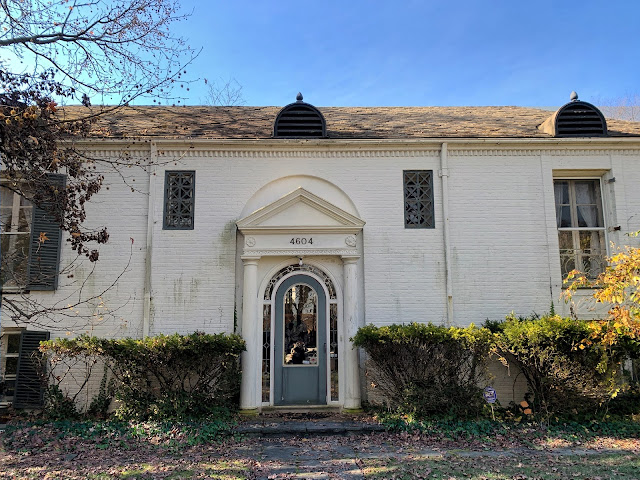 I'd like to think that the reason for this was that it was an unusual Palmer & Lamdin house, but in all actuality, it was the price: $325,000. That is a seriously low price for houses in this area, at this time of low interest rates, but the house needs a lot of work. The same owners have occupied it for more than 30 years, and it showed!

Regardless of all of that, this house is really unusual, but wonderful.

To begin, the sort of U-shaped house looks like it's maybe one-and-a-half stories. The top of the front door reaches nearly to the roofline. 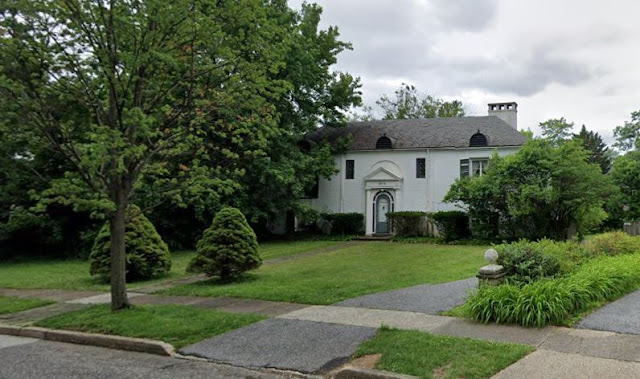 What's hard to see in this image is that there are windows at ground level, partly obscured by the plantings. You enter the house into a hallway, and immediately to the right, behind a wall, is the staircase. Down about six steps and to the right and left, are the living room and the dining room, which leads back to a kitchen wing and then a small bedroom and bath.

When you enter the living and dining rooms, there are windows at the front of the house with radiators beneath them. What you don't really realize from the interior is that the sill of the window is aligned with the ground, and the radiator is below grade. 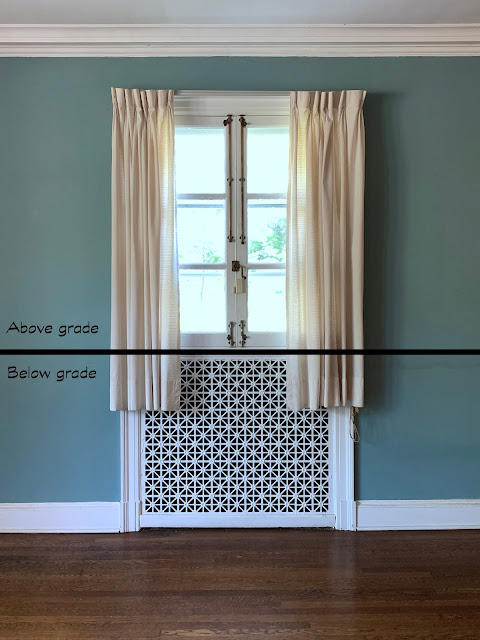 Since the property slopes towards the back, the rest of the house is at ground level.

Luckily, the original plans came with the house, so we could look at them and see what Palmer & Lamdin intended. Sadly, they were in poor shape, and although there was a set of velums, there wasn't a place to unroll them that would allow clear photographs. 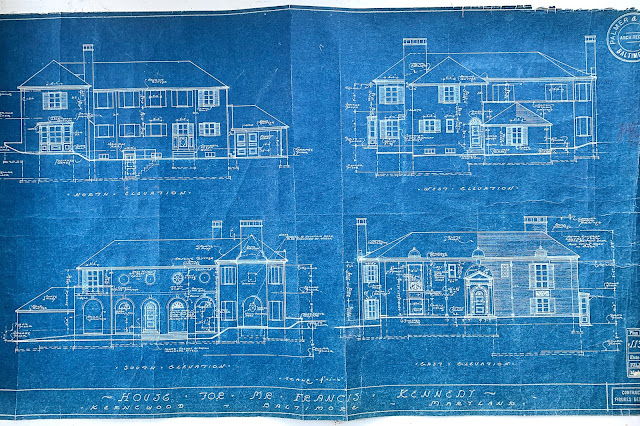 The living room had a beautiful fireplace at one end, which was a half of an octagon. As mentioned the front windows were sash style, and the rear windows were French doors, leading to a garden. 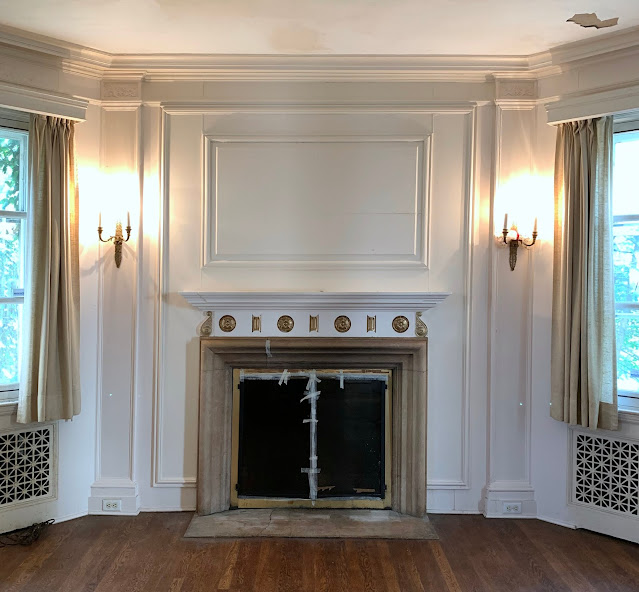 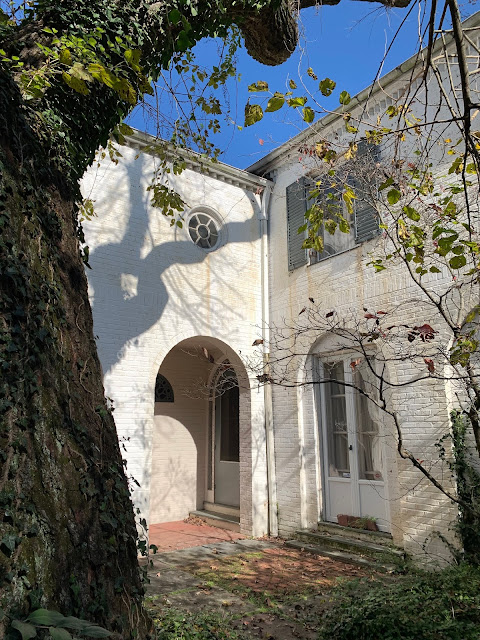 The dining room is across the marble-floored hall from the living room, and it also has a fireplace. The original etched glass sconces are still in place, just one of the myriad details in this house. 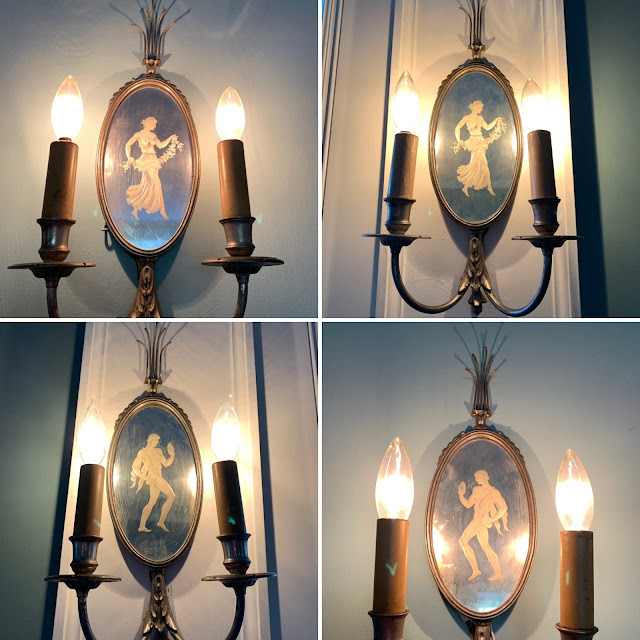 Off of the dining room, there is a small room down a few steps and with a low-hanging light in the middle. Initially, I thought it was a billiards room, but then upon re-thinking it, it might be a card room. 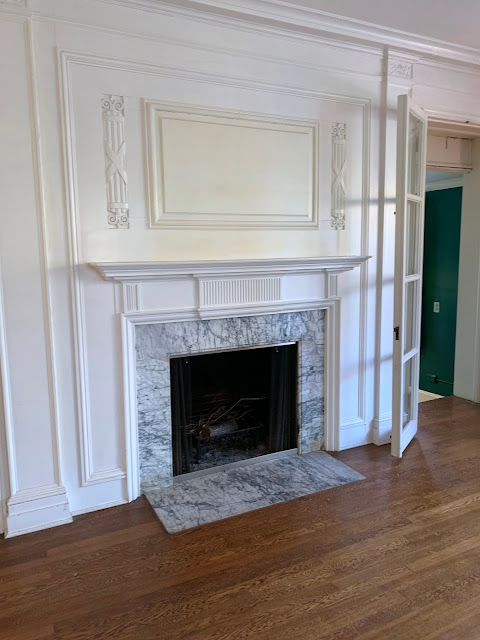 There is a great old pantry across from the kitchen and I sincerely hope that no-one rips it out. 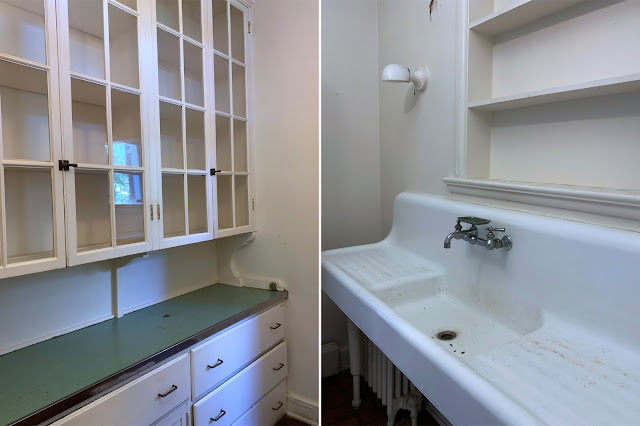 It has tons of space for china and linens and a great old porcelain sink with more shelves above it. Honestly, you could keep everything in the room, but just refresh it. Just beyond the kitchen, which needs to be redone, there is a small bed/bath suite. I am guessing this was originally for a cook.

As you head upstairs, either through the back stairs or the main stairs in the front of the house, you come to a small overlook. 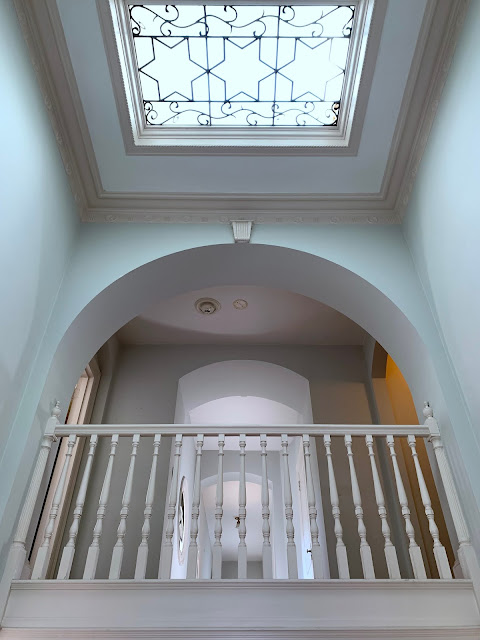 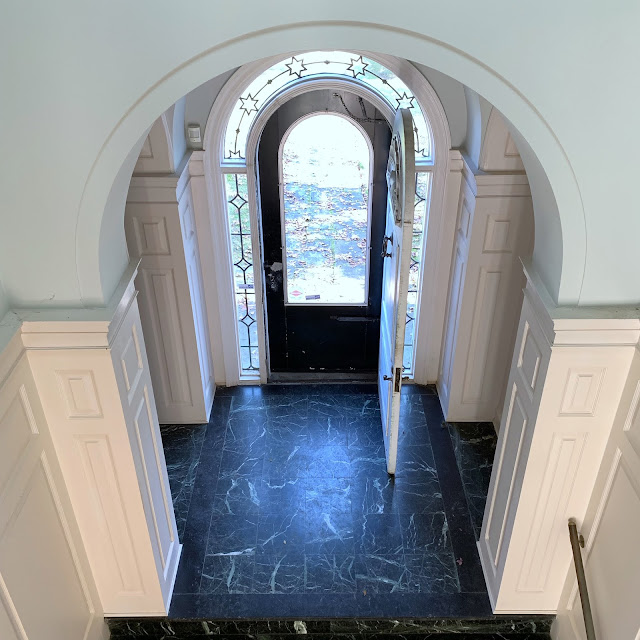 And looking in the other direction, down the hallway to several bedrooms and ending at what looks like another servant's room. 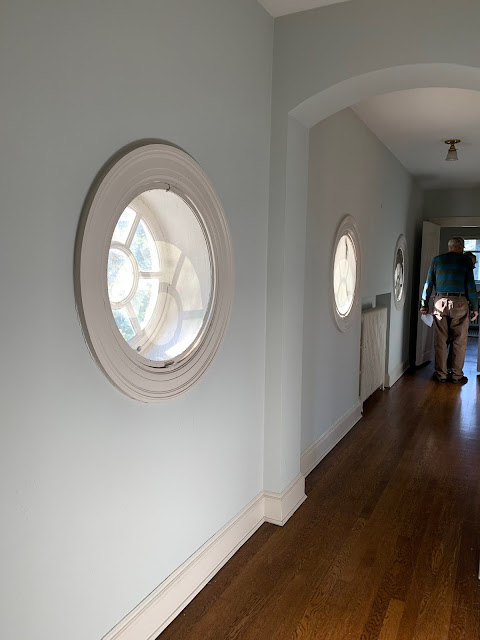 The main bedroom, with an en suite bathroom filled with original or early plumbing, has the same semi-octagonal end. It also features French doors in either side of the room. 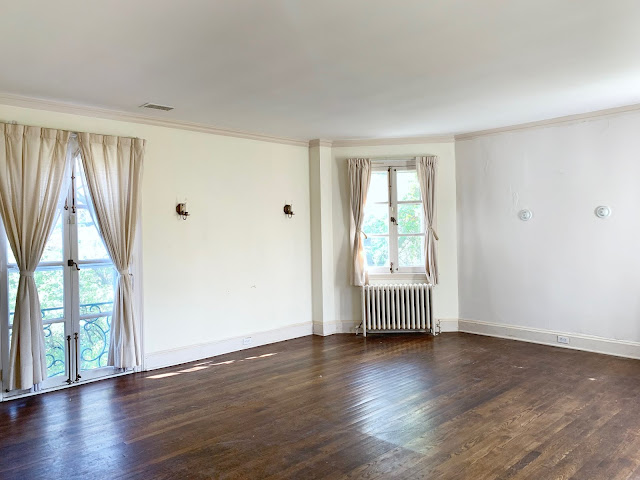 As I mentioned, the house is filled with details, including jib doors which hide closets, leaded glass with stars, interesting carvings, 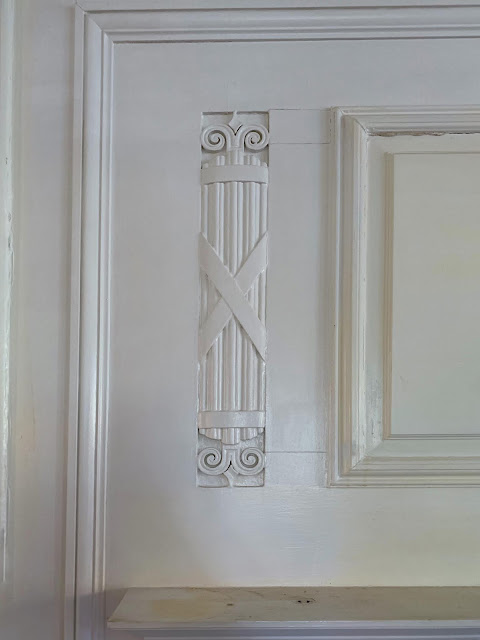 loads and loads of arched doors and windows (someone said too many!), 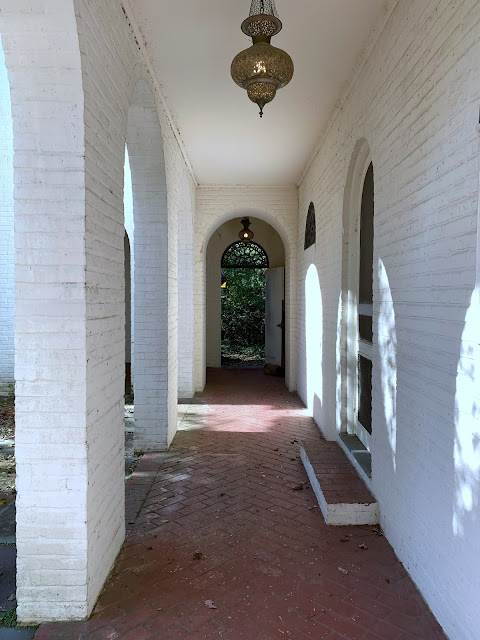 and the seriously beautiful front door. 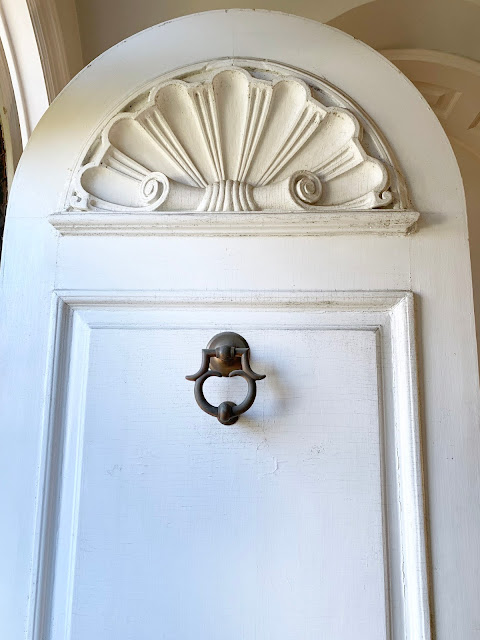 Almost all of the doors were about 1.5" to 2" thick! Really incredible.

It is so lucky that the original blueprints are available and it was a lot of fun going over them with a friend. 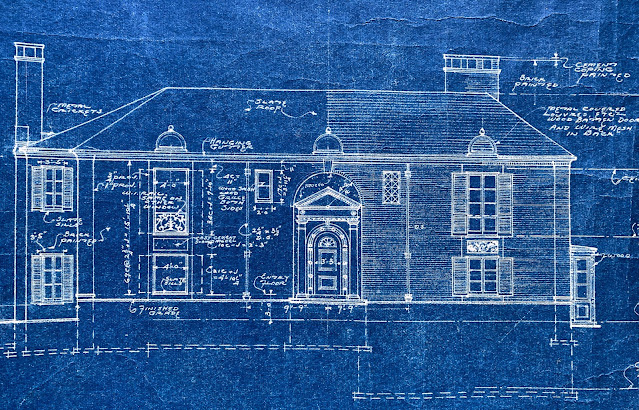 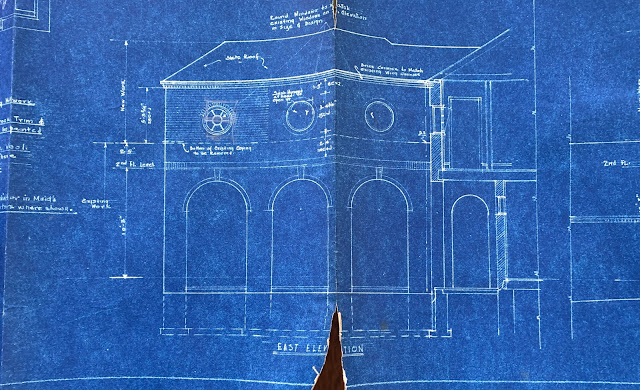 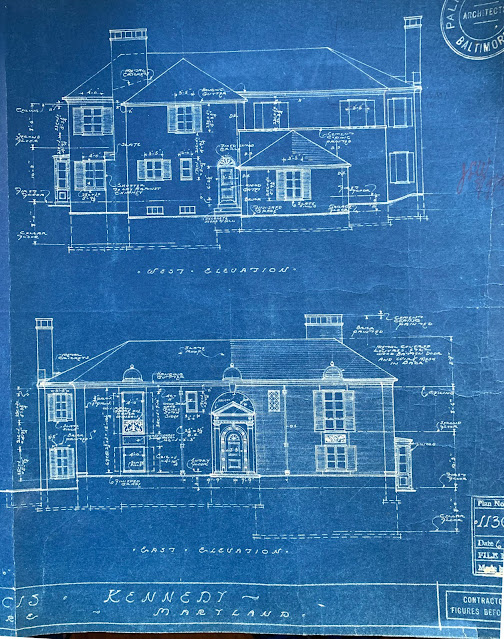 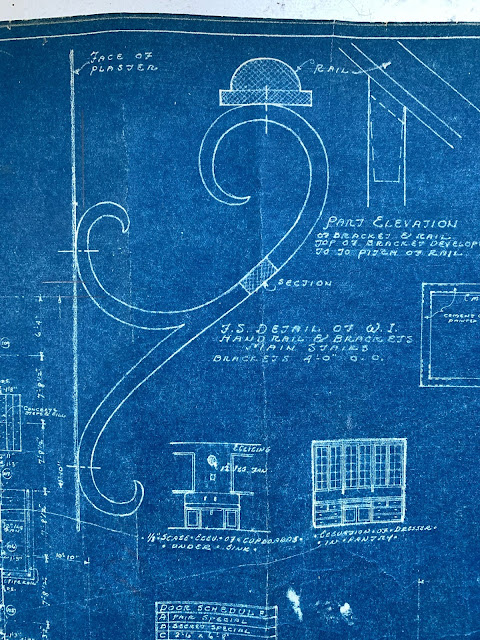 I still don't know the final offer amount for the house, but I will update this post once I learn. The house needs a lot of work, and it will be a treasure once it's finished.
P.S. I recently heard that the house was sold to a man who bought it for his daughter who is attending Loyola College around the corner. This is in violation of the neighborhood covenants, which prohibit college students living in the neighborhood. When we drove by it the other week, it didn't look like any work had been done, and the shutters were still hanging off. This is a complete travesty, as you KNOW these college kids will not take care of the house.
at November 16, 2020 1 comment:

Email ThisBlogThis!Share to TwitterShare to FacebookShare to Pinterest
Labels: Architectural Elements, Guilford, On the Market, Then & Now

This wonderful Palmer & Lamdin has been on and off the market for the past 18 months or so, and it was sold late last year. It's on the market again, being flipped after a thorough renovation, which, thankfully, left many of the original interior details. 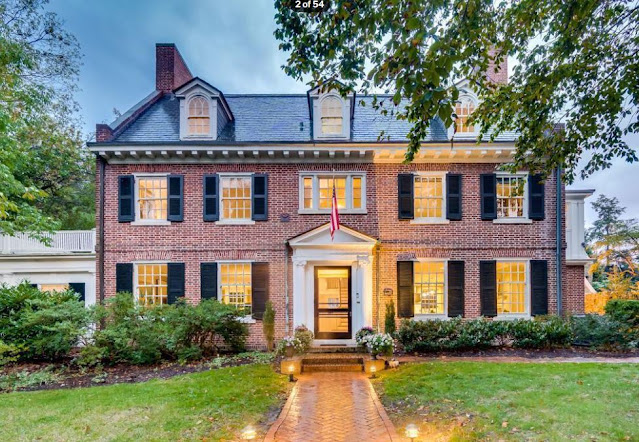 The house was built in 1913 for Mr. & Mrs. Rowland Clapp, Esq. and the architect was Edward L. Palmer, as noted in an October 1913 squib in the Baltimore Sun. The house is in the brick colonial style. 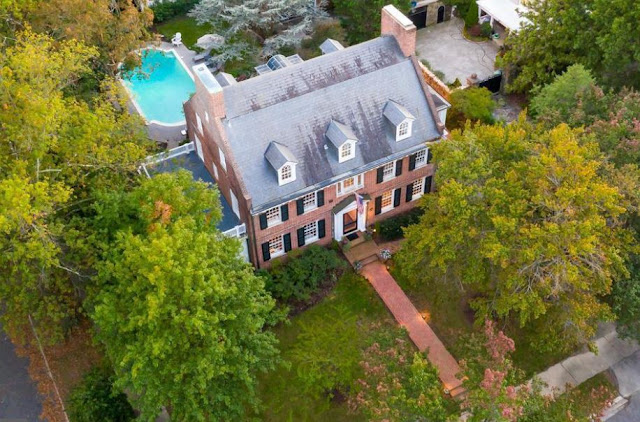 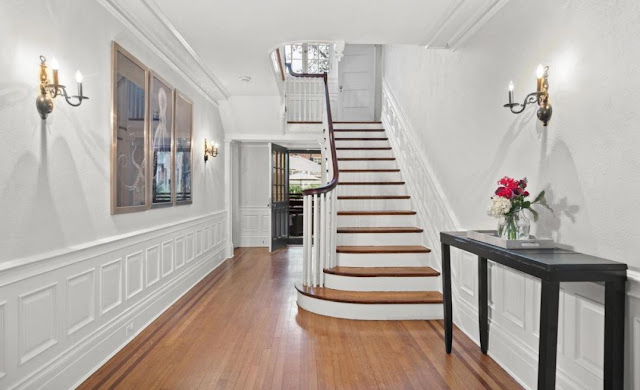 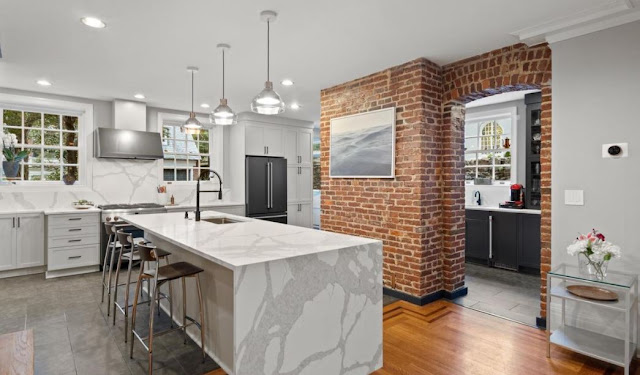 Graceful living spaces in the living room with a fireplace and adjacent family room with custom built- ins. The spectacular list of upgrades extend to the upper levels that feature a master suite with a truly decadent master bath , spacious his and her walk in closets, as well as additional en suite bedrooms with balcony access. 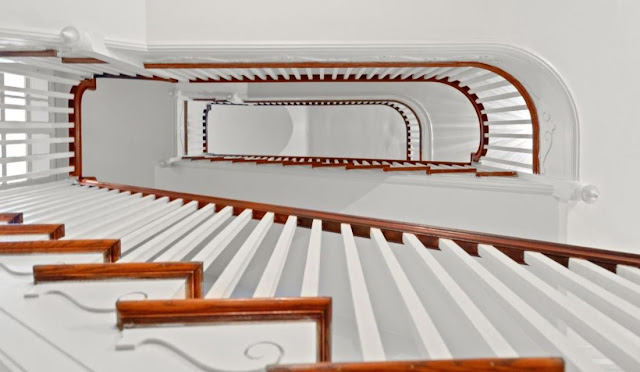 The breathtaking exterior is a retreat unto itself with a beautiful in-ground pool, patio, professionally landscaped and lighted grounds, and a two car detached garage with pull down studio/storage area. Ample storage in the lower level, two new zoned AC units, nest thermostats. 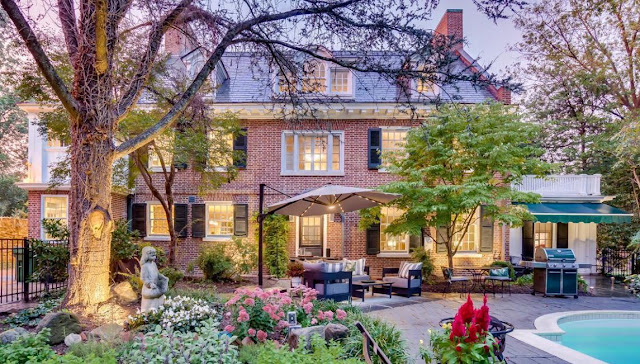