When I was a child, one of my great aunties lived in an apartment which had a courtyard with a pond with huge goldfish. It was the Roland Park Apartments (RPA), which was designed by Palmer & Lamdin in about 1925. 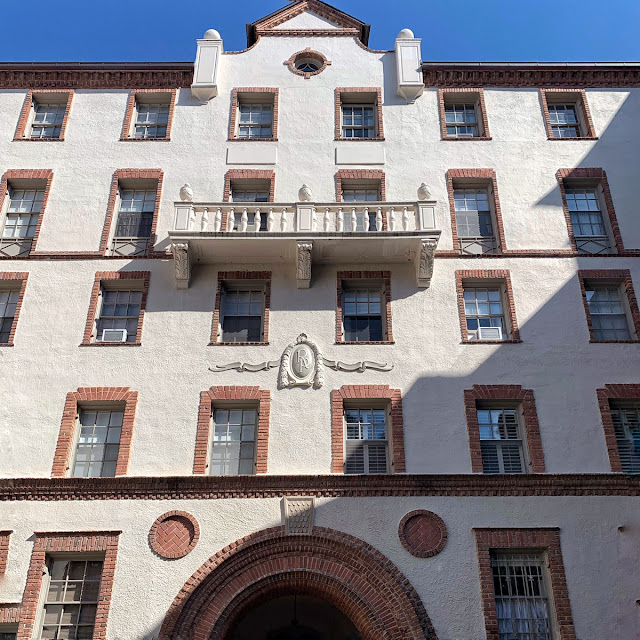 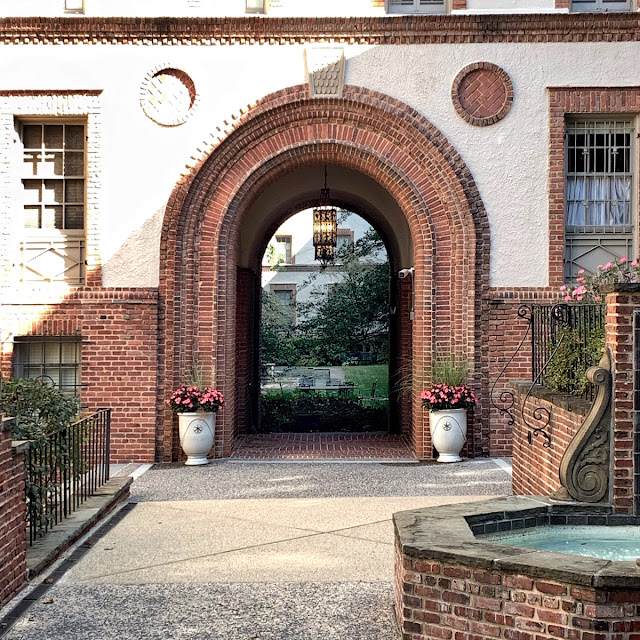 The building is filled with gorgeous little (and big) details from the moment you enter through the front path, 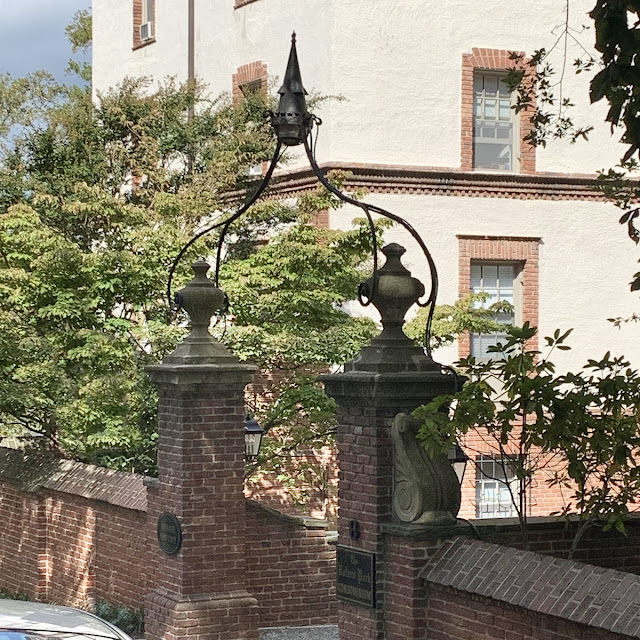 with gardens on both sides and a lovely fountain. 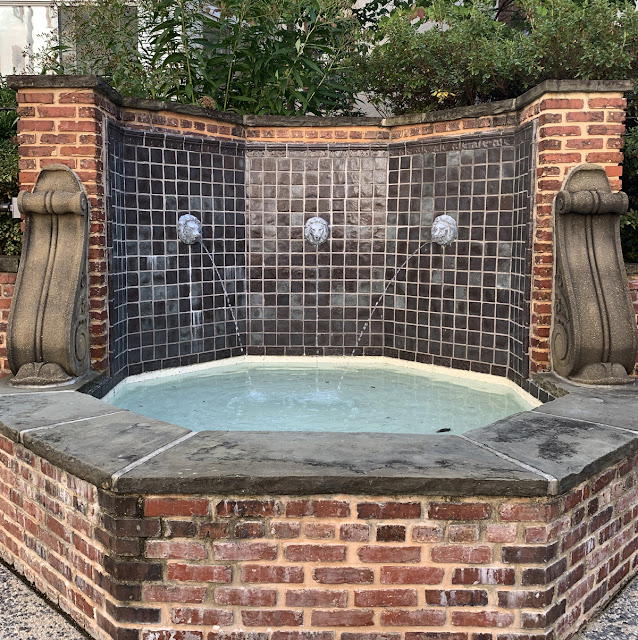 You enter the passageway, which is home to the manager's office and the post boxes, has two beautiful lanterns. 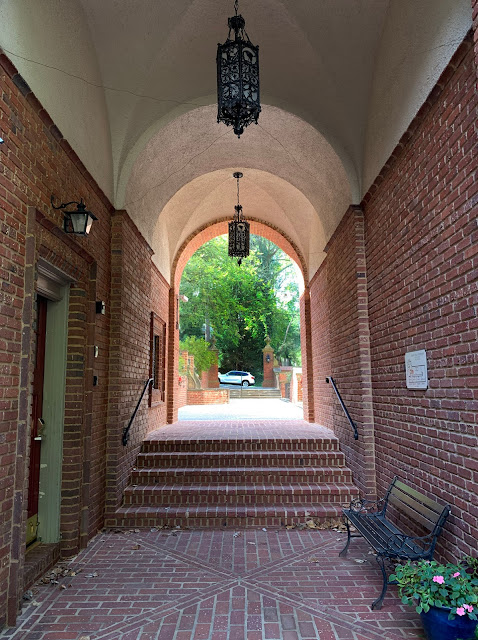 The apartments (now condos) are housed in five connected five-story buildings, each with private elevators. There are 20 individual floor plans, each with unique architectural designs and decorative charms. Many of the apartments have sun porches and working fireplaces. 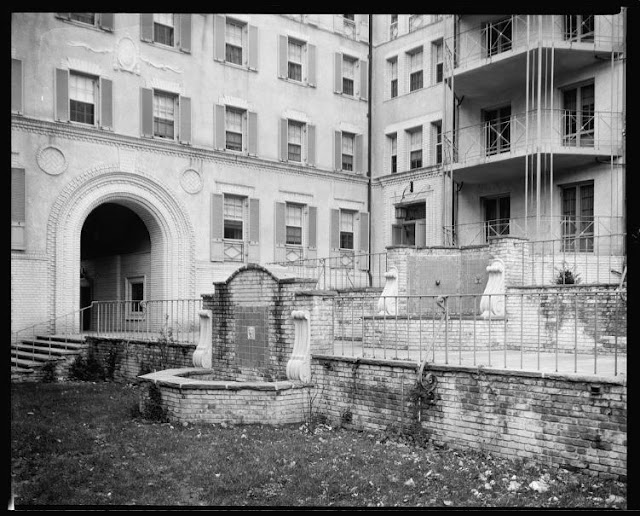 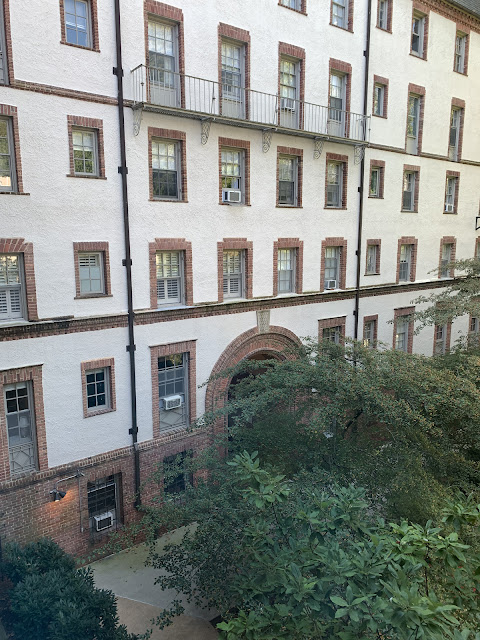 In addition to the apartments, there is a huge car barn, that designed by Wyatt & Nolting in 1903, and served as the stables for the neighborhood. 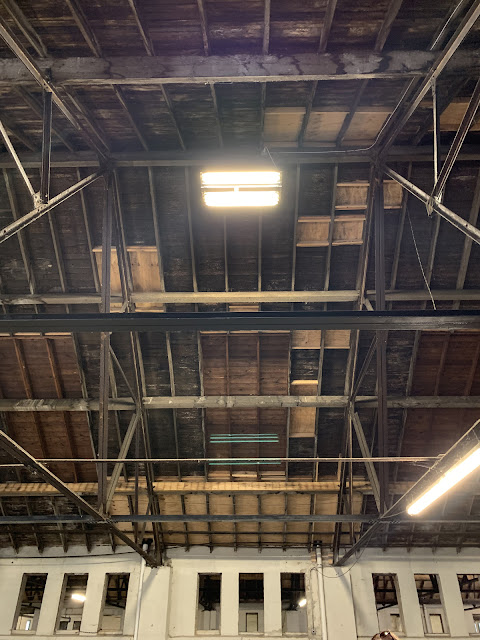 As a child, I remember riding my bike through the car barn (before there were electronic doors) and imagining what it was like when it was stables.


Between the main buildings and the garage is the original smokestack from the early heating system for the building. It's interesting to see this still here. 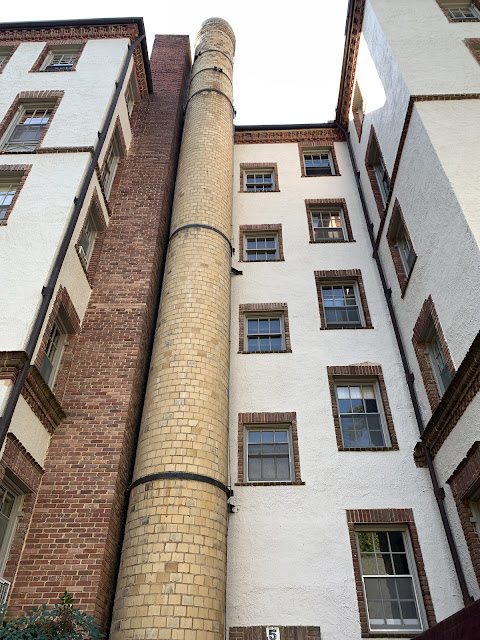 One of the main attractions of this building are the gardens which surround it. They are beautifully maintained and lush, even after no rain for nearly a month. 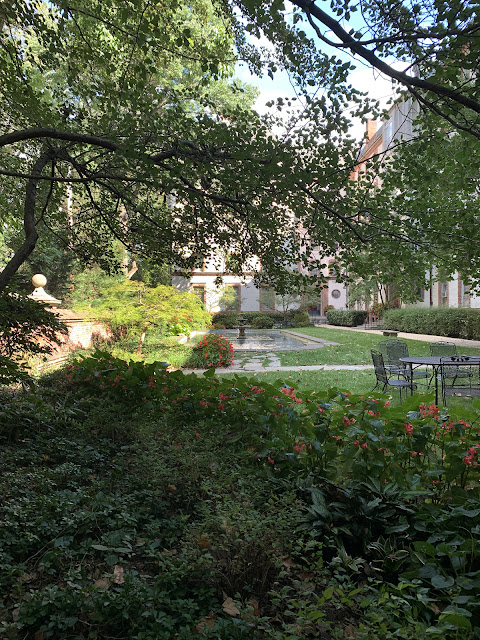 The pond, which is the centerpiece of the courtyard, is so charming. You can also see Palmer's trademark swooped roofline in this image. Almost all of the apartments have a view of the courtyard, or they look out over the Baltimore Country Club and the Jones Falls Valley. 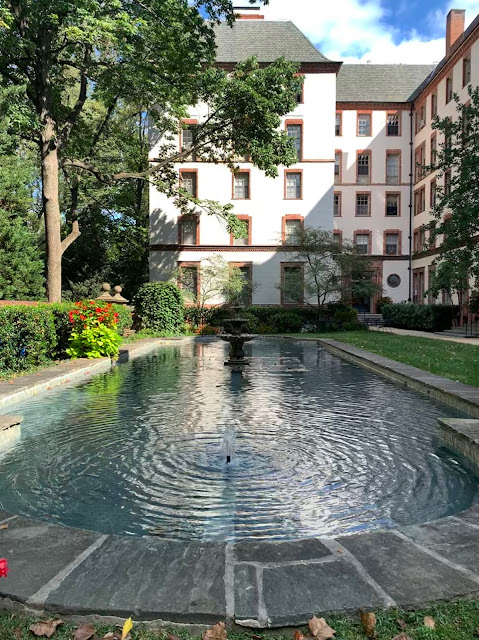 As I mentioned, this place is filled with Palmer's signature details, like the roofline... But also the mix of stucco and brick, 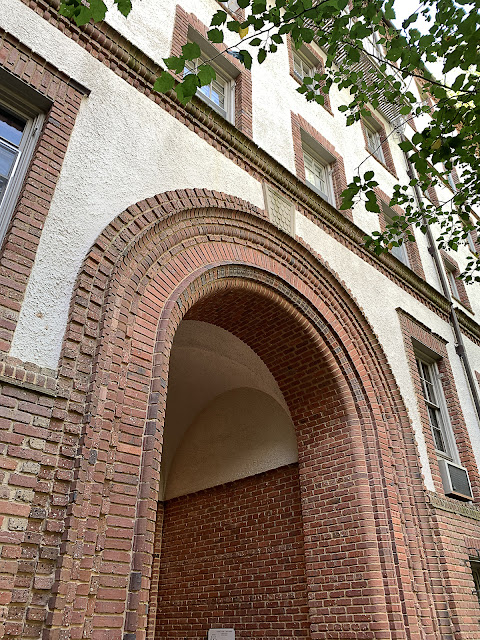 with an emphasis on a variety of bricks and brickwork styles. 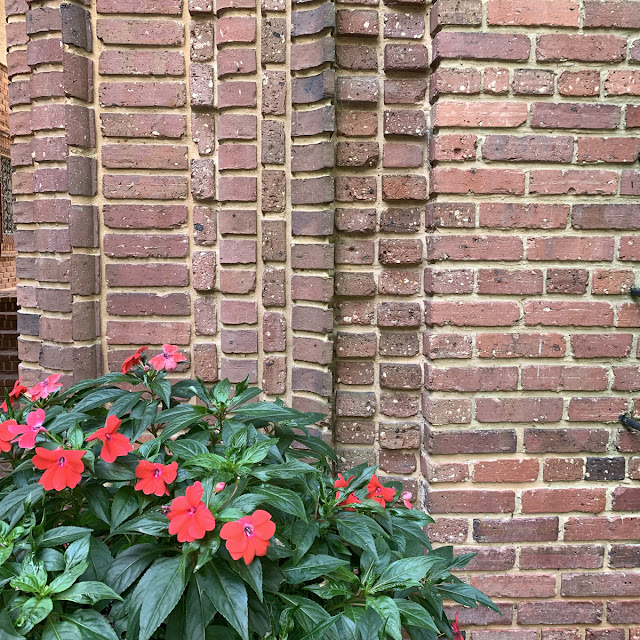 There are also the signature nooks and crannies on the property. 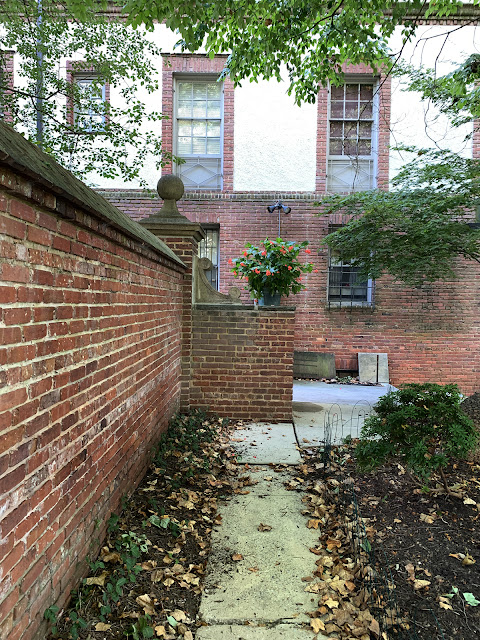 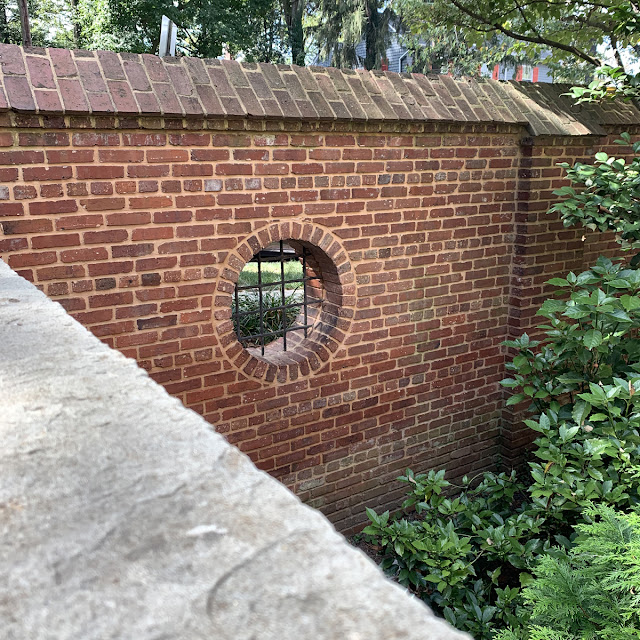 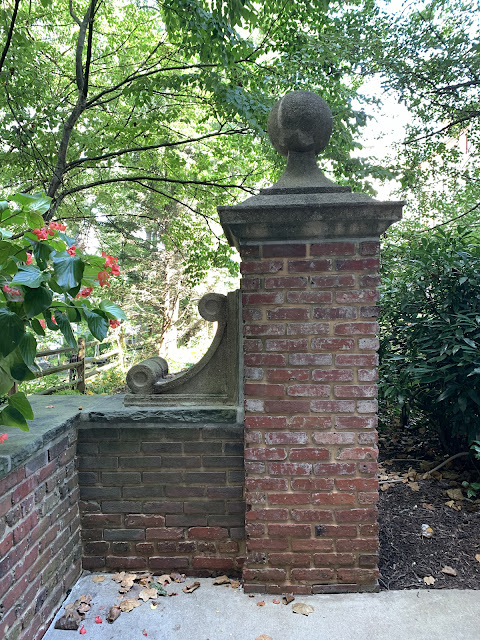 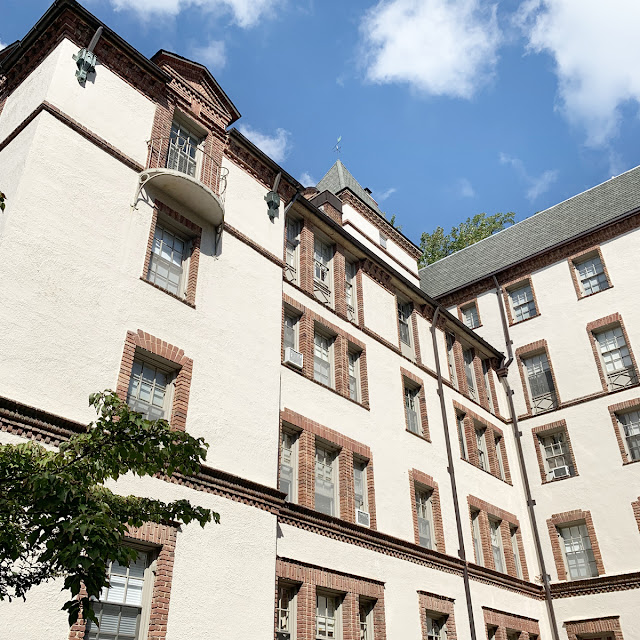 Because there are five buildings, the entrances to each one echoes the design of the building and gives the illusion of the place being smaller and more private than it actually is. 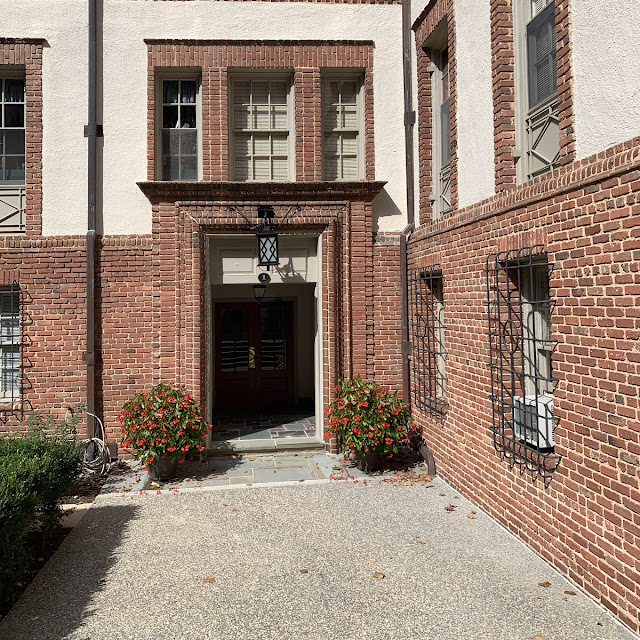 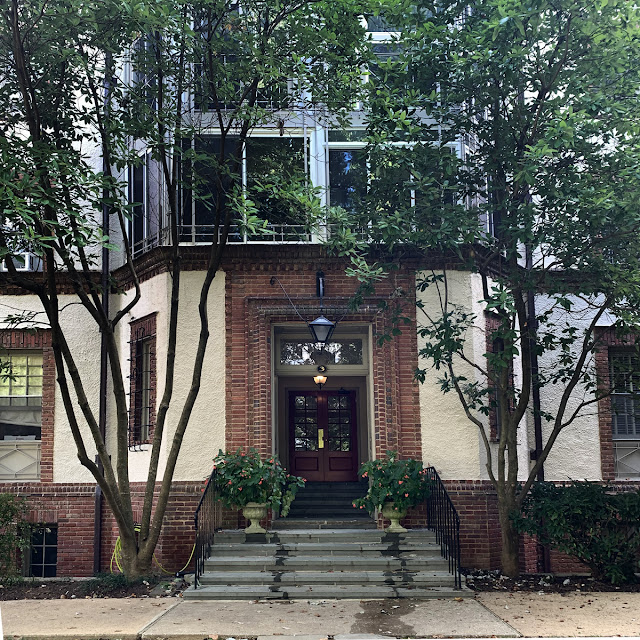 These historic photos indicate that the brick might have originally been painted the same color as the stucco! 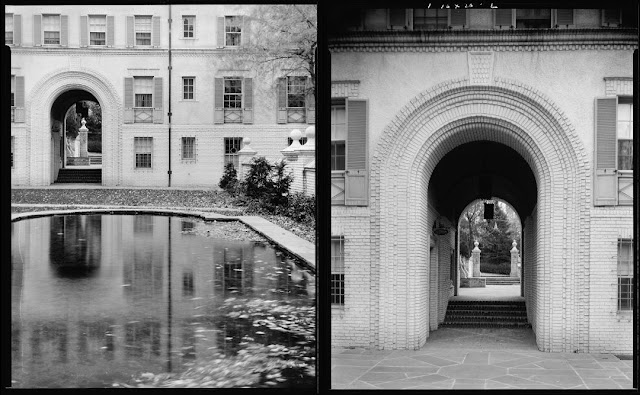 Several months ago, there was a small piece in the New York Times' real estate section about one of the apartments currently on the market. You can read it, and see interior images here. You can also read about the building and its history here.
at September 30, 2019