Dundalk and Palmer on WYPR

In preparation for an upcoming event with the Baltimore Architecture Foundation and Baltimore Heritage, Amy Menzur, head of Dundalk Renaissance, and I had the opportunity to speak to Sheilah Kast at WYPR's "On the Record" radio show. It aired on June 4 at 9:30 a.m. I have written about Dundalk, here. 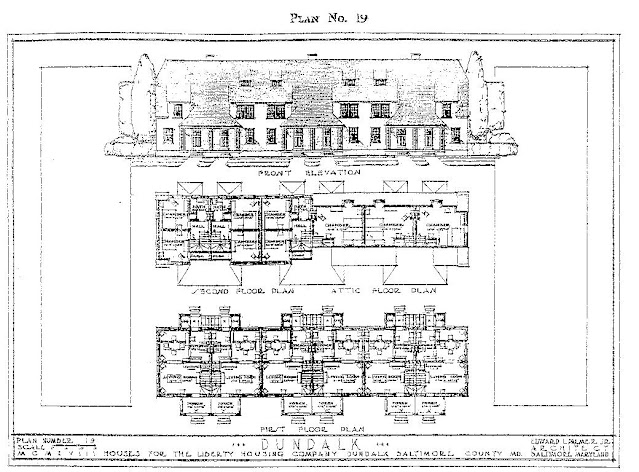 On July 9, Amy and I will be speaking on "Designs for Victory: Olmsted-inspired Garden City Plans for Historic Dundalk." While Amy will be concentrating on the history of Dundalk and its current renaissance, I will be talking on Edward Palmer's part in designing the housing stock for the "Ship" streets.

Here's the summary of the event:

The Bethlehem Steel Mill at Sparrows Point launched an effort to create a Garden City-style town in 1917 just before the US entered WWI. At the same time, the Federal Government began housing production for war workers. Frederick Law Olmsted, Jr. (FLO Jr.) headed the Town Planning division of the new United States Housing Corporation. Several colleagues in the nascent profession of city planning who had worked with FLO Jr. on Roland Park and Forest Hills Gardens were all directly involved in designing Dundalk, including Baltimore architect Edward Palmer, Roland Park Company leader Edward Bouton, and architects Grosvenor Atterbury and Charles Wellford Leavitt. Their plans were inspired by their designs for more affluent areas, including curvilinear streets, separation of uses, green spaces, and restrictive covenants. We will explore how these plans created a new community for workers and managers, but was segregated by race.

Here are my notes for today's interview.

From 1907 to 1917, Edward L. Palmer was the architect for the Roland Park Company, and he designed a number of houses there, including his own, modeled on a Swiss chalet. In addition to Roland Park, he had a small private practice.

In 1917, Palmer opened his own architectural practice, continuing residential work, and securing the commission for the village of Dundalk. He had worked Edward Bouton at the Roland Park Company, who knew he could design a variety of distinct housing types and hone to the company’s mandate of expedience and low cost.  [His partner, William Lamdin, joined the firm in 1920.]

In 1917, Edward Palmer was asked to create a village out of 1,000 acres of farmland just beyond the eastern edge of the city. The land had been purchased by the Bethlehem Steel Company to house their workers who had families.

At their peak, around the time of WWI, there were more than 2,500 company towns, housing 3% of the US population. The companies that ran the towns were primarily labor companies such as coal, steel, lumber and various war industries.

Companies understood that their employees did not want to live in cramped quarters, so in an attempt to keep the workers happy, some forward-thinking companies created villages modeled on the Garden City movement in England. Green space was valued, and attention was given to architectural details, an Edward Palmer specialty. Good housing close to the plant or factory enhanced quality of life for the workers, reduced absenteeism and reduced commuting time.

The two-story houses Palmer designed for Dundalk was limited to three or four basic plans. They all had steeply pitched roofs with a combination of gable, jerkin-head, shed and flared shapes and stucco exteriors. Influences from Palmer's work in Roland Park can be seen in the housing stock in Dundalk. In fact, there are some nearly identical houses in both neighborhoods. However, all of the houses in Dundalk are semi-detached or townhouses.

This “company town” concept was also carried out at Wawaset in Wilmington, Delaware, when the DuPont Company hired Palmer to create a similar village for the company’s executives and scientists. The village stretched two city blocks wide by five blocks long, blending 50 town houses, 56 duplex houses and 101 single-family houses.

In a departure from Dundalk, but not Roland Park, Guilford and Homeland, houses in Wawaset included land-use restrictions with each property deed. The strict building and maintenance provisions were aimed at preserving for original and future residents the integrity and attractiveness of Wawaset’s architectural concepts.

Email ThisBlogThis!Share to TwitterShare to FacebookShare to Pinterest
Labels: Dundalk, Then & Now, Wawaset