Many years ago, when I used to write by blog, Pigtown*Design, I wrote a piece about Palmer & Lamdin houses. I received a comment from a man in York, PA who told me he lived in a P&L house, and that there were several others in the neighborhood. Walter Schamu went up to visit, but it wasn't until earlier this spring that I visited.

This morning, he sent me a link to an article "Colossal gardens planned for Shipley Mansion near summit in Wyndham Hills" on a P&L property in Wyndam Hills, PA, along with an Olmsted project. Very kindly, the author, Stephen Smith, gave me permission to reprint it here.

In 1931, Olmsted Brothers Landscape Architects designed elegant grounds, surrounding a mansion planned for William S. Shipley, at one of the most elevated sites in Wyndham Hills. The site included a former quarry, in which a vast sunken garden was intended. 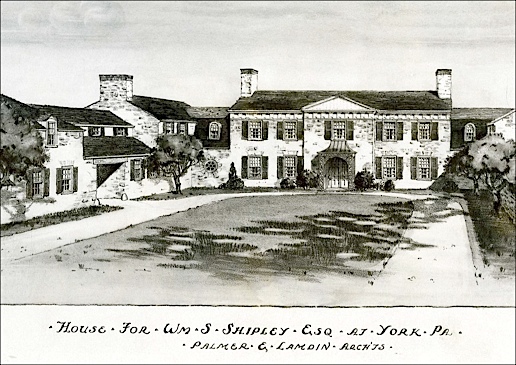 Grace Hartman provided some insight about that early Wyndham Hills property of William S. Shipley, which bordered Summit Circle. Grace noted, “A friend shared your article concerning Shipley’s lowlands property on Smallbrook Lane [in Wyndham Hills]. It was passed along due to David Miley’s comment about the Olmsted connection to the colossal gardens planned for the Shipley mansion. Your reply, [placing that property on the southeast corner of Glenwood Drive and S. Summit Circle] pinpoints the site I always suspected. Causing additional exploration.”

Grace’s daughter discovered a York Dispatch article, which appeared February 28, 1931; with the headlines: “W. S. Shipley to Build Mansion at Wyndham Hills, South of York.” After providing some background, Grace shares why the planned gardens at the Shipley mansion have long since held her interest.

William S. Shipley is known for his leadership in the “York Plan” and for being the national spokesman for that defense production plan during World War II; however he also provided astute leadership during York Ice Machinery Corporation’s transition from Ice Making to Air Conditioning during the 1930s. William S. Shipley, then based in Brooklyn, New York, succeeded his older brother Thomas Shipley as president of Yorkco in 1930. 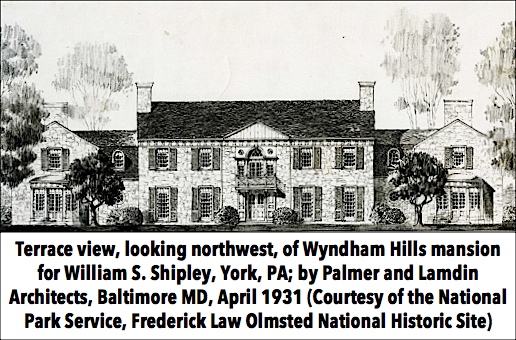 Quoting from the February 28, 1931 article in The York Dispatch: “William S. Shipley, president of the York Ice Machinery Corporation, will build a beautiful, modern home on one of the most elevated sites at Wyndham Hills, the attractive new real estate development south of York.”

“The site includes a quarry, which will be made into a vast sunken garden of great beauty. This picturesque feature will undoubtedly prove one of the show spots of Wyndham Hills, as it will be the largest sunken garden in the United States, covering more than an acre of land well suited for the purpose. The grounds surrounding the home to be built will be beautiful.”

The Frederick Law Olmsted National Historic Site, of the National Park Service, contains many of the Olmsted design iterations for the grounds. The August 19, 1931 plans, with a small September revision, appear to be the final version. The following is an enlarged slice of that Grading Plan; which includes the mansion and the sunken garden, surrounding a pond. I’ve annotated that slice with a few notes and noted the Forecourt and Terrace Viewpoints of the earlier mansion illustrations.

The location of the Olmsted Grading Plan slice, is positioned, and ghosted, in the following traditional overall view with North upward. The 11.7-acres, which William S. Shipley initiated a purchase during February of 1931, was in Section U of Wyndham Hills, and was originally set-up as nine lots; of which eight were initially intended for houses, with the quarry site not intended for sale. However with his vision, Shipley intended to utilize that former quarry as a sunken garden, via guidance from Olmsted. 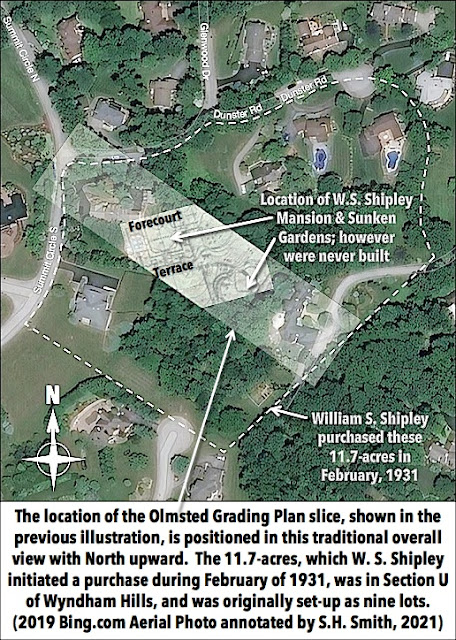 Grace Hartman shared: “Regularly visited a school friend up in Wyndham Hills. Her parents often had troubles with the sneaky regulations to live in that development. And where I heard tales of other residents at odds with those in charge of the Wyndham Hills development. Do not remember most, however being a garden person, sticking in my mind was ruling on colossal gardens planned in the Summit Circle vicinity declared a nuisance. Thanks, now know they were likely Shipley’s gardens designed by Olmsted.”

The Olmsted drawings contained many elevation details for the grounds; such as the following pond and overlook elevation detail within the sunken garden. That and other overlook structures around the grounds appear to be at odds with restrictions placed on Wyndham Hills property owners. 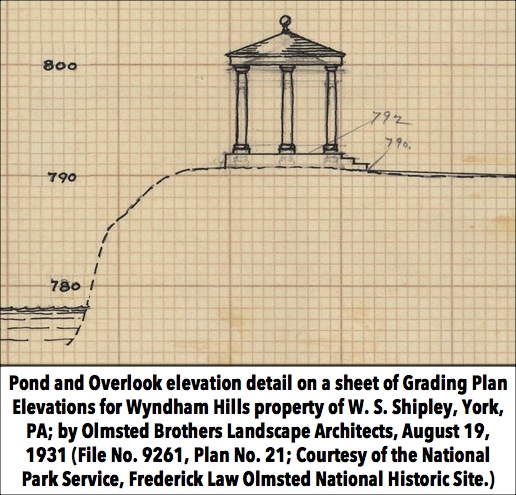 The Olmsted plans call for formal gardens, rock gardens and a sunken garden; all ornamental. However the same plans for Shipley’s property also included large sections set aside for vegetable gardens and fruit trees.

William S. Shipley took ownership of the 11.7-acre property on November 10, 1931, upon the final payment to Wyndham Hills Corporation (Deed Book 27-C, page 368). Within Shipley’s deed, a clause notes he is under and subject to the covenants, agreements, conditions, easements, restrictions and charges contained in and set forth in Deed Book 25-A, page 516; made October 1, 1931. Those restrictions do not allow farming related endeavors, by residents within Wyndham Hills.

The design iterations on the Shipley mansion and grounds progressed throughout 1931, with the final versions apparently completed per a small September revision to the August 19, 1931 plans. Then Wyndham Hills Corporation releases their set of restrictions on October 1, 1931. With the restrictions suddenly sprung on William S. Shipley, within his November 10, 1931 deed, one wonders if he simply decided to walk away from his plans for that property, which was later sold back to Wyndham Hills Corporation.

It appears many, and possibly all, Wyndham Hills deeds, through the late 1950s, contain the clause noting the owner is under and subject to the covenants, agreements, conditions, easements, restrictions and charges contained in and set forth in Deed Book 25-A, page 516. Buried in that October 1, 1931 deed is a covenant prohibiting home ownership or occupancy by any black or people of Asian descent.

Thanks to a query by Grace Hartman for instigating interesting research on William S. Shipley’s hill-top property; which led to a better understanding of how covenants, agreements, conditions, easements, restrictions and charges show up in several decades of early Wyndham Hills deeds. Also, upon reading the newspaper article submitted by Grace, describing a former quarry to be transformed into a sunken garden on the Shipley property, I immediately envisioned a lovely sunken garden seen years earlier, in British Columbia.

The Sunken Garden, at Butchart Gardens, near Victoria, British Columbia, Canada; was created in an old limestone quarry in the early 1900s. They might have been the inspiration for Olmsted’s, or William S. Shipley’s, vision for a sunken garden in an old quarry on his 11.7-acre property in Wyndham Hills. 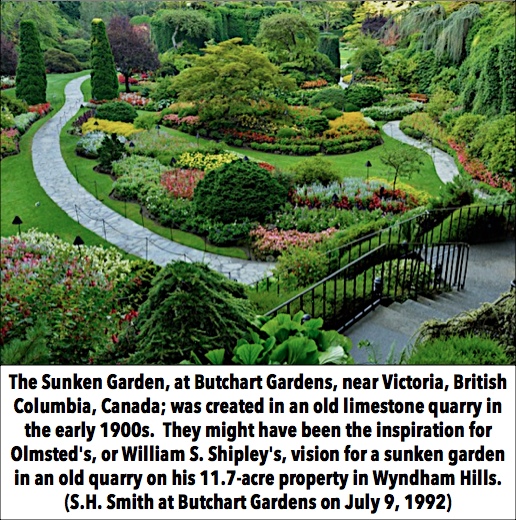 Again, many thanks to Stephen Smith for giving permission to reprint this article. It's amazing to see another example of Palmer & Lamdin's work outside of Baltimore.
at August 06, 2021

Email ThisBlogThis!Share to TwitterShare to FacebookShare to Pinterest
Labels: In the Wild, York PA