The Northway Apartments: A Long Saga with an Unhappy Ending

Since the early 1920's, the Northway Apartment, has stood on North Charles Street and Bishops Road. It's set back from a small park, with beautiful classical designs and stepped back sections. Urns adorn the corners to give it an air of elegance. The ground floor is lit by beautiful double-height Palladian windows. The lobby was filled with elaborate mill- and plaster-work. It was an address to be coveted, and many families from Guilford and Roland Park moved there when they downsized, and families from the counties used it as their pied à terre. 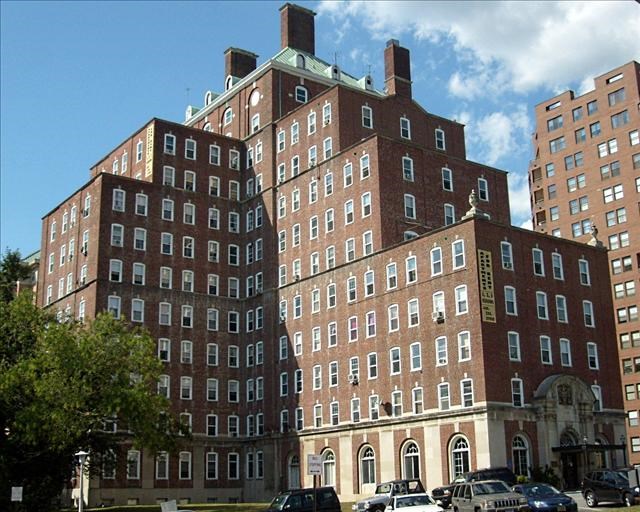 My sources tell me that this was once a place of grace and charm, with huge apartments, designed to look like Guilford homes. They had front and rear entrances, copious details including cedar closets, french doors, and residents who lived the life of elegance and faded grandeur. The lobby boasted Art Deco details, and plaster motifs including seahorses and flying geese. 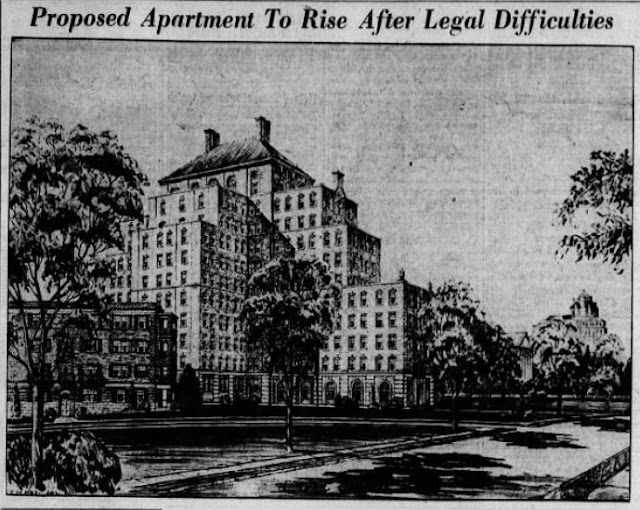 Right from its start, there were problems with this building. Actually, even before it was built, the neighbors objected strenuously to it being built, because it was so out of scale for the area. But after going to the Supreme Court, the building was allowed to go forward. 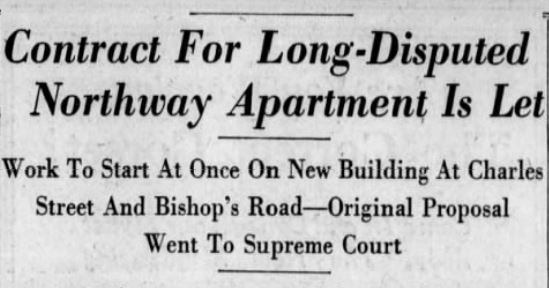 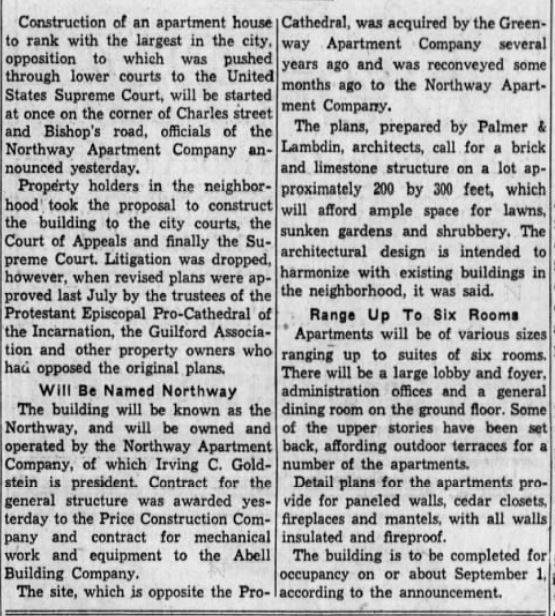 In the early years, the newspapers were filled with stories of socialites who were entertaining in their Northway apartments, or traveling from or returning to the Northway. There was even a very salacious story about a young woman who had just finished a conversation from the "house phone booth" with the man whom she'd sued for alienation of affections, when she collapsed from being poisoned. 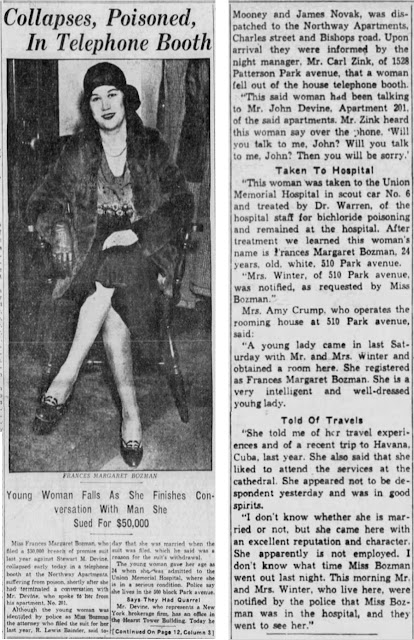 As the Northway approached its middle age, it was bought and sold several times, once twice within one summer. The Knott family purchased it to help diversify their portfolio, and then a string of LLC's and absentee landlords bought it.

In the 1970's, the Sunpapers are filled with back and forth court cases between the tenants and the owners. No heat or hot water? Then no rent is paid. Citations from the City's housing department are numerous, but neither addressed nor paid. At one point, when once again, the heat and hot water were off, it took the city four days to work through all of the paper trails to find the owners and get them to fix the problems. 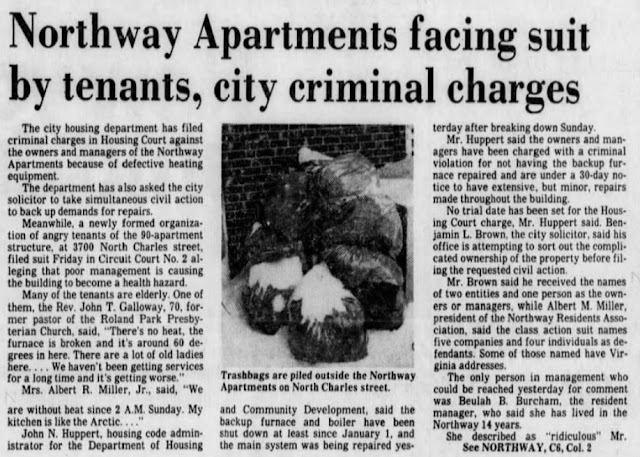 After a proposal to turn the Northway into "upscale" senior living residences, it was sold for "luxury student living." Sadly, the Northway has now been hacked to pieces, all of the graceful design elements have been torn out, and worst of all, the beautiful windows, including huge Palladian ones, have been replaced by tacky white vinyl ones, with snap in dividers. Sickening. 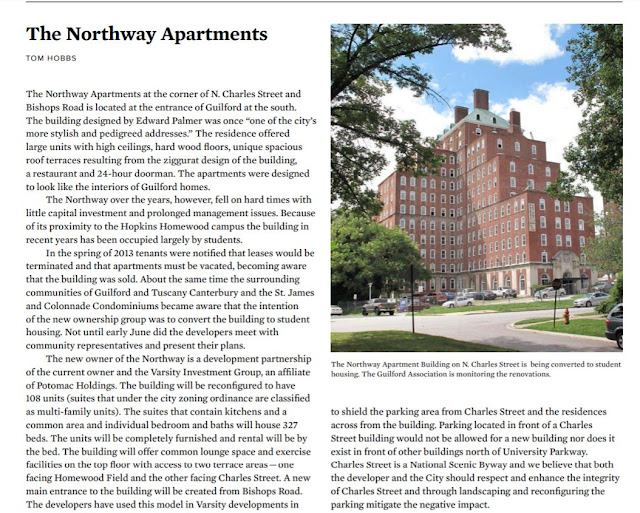 The building originally had 94 apartments, but now the new owners, "The Academy on Charles" list it as having 328 "beds," the apartments having been sub-divided into "suites" with numerous students living there. (Not sure how many options there are... 3,214?) 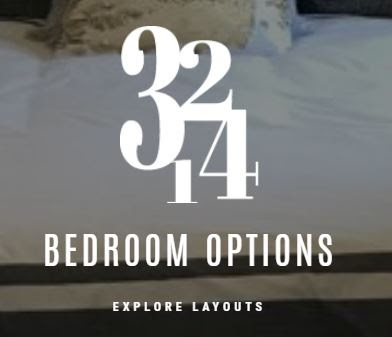 They have basically taken a two bedroom apartment and subdivided it into four bedrooms. And each bedroom rents for $1500+ a month! 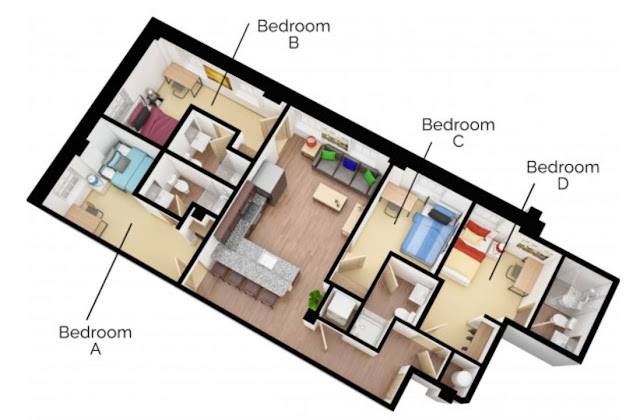 But it's upscale! Chic hardwood-style floors! Luxurious! Klassy! World-Class Features... except for the ones they tore out. However, I am not seeing any sign of a "gourmet" kitchen!

There was an incident where members of the JHU lacrosse team went on a rampage in the lobby and caused more than $10,000 worth of damage, and stories of huge parties being held on the terraces, much to the annoyance of the residents of the neighboring St. James Apartments. There was also a sexual assault in one of the elevators. So I guess they're not really all that klassy.
at November 08, 2019

Email ThisBlogThis!Share to TwitterShare to FacebookShare to Pinterest
Labels: Apartments, Guilford, Then & Now