In 1907, Edward Livingston Palmer, Jr., a native Baltimorean and a graduate of Johns Hopkins University and the architectural school of the University of Pennsylvania, returned to Baltimore after four years as a draftsman in the Washington office of Hornblower & Marshall. 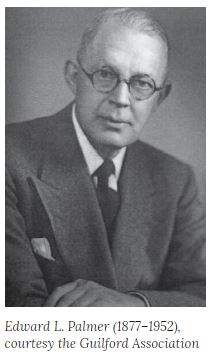 For the next 10 years, 1907-1917, he served as architect for the Roland Park Company of Baltimore, for which he designed a number of houses and in addition, had some private residential practice.

In 1917, Mr. Palmer opened his own office for the practice of architecture, continuing his residential work, and in 1917-1918, designing buildings for two large housing developments: One for Bethlehem Steel Company in Dundalk, Maryland; the other for the DuPont Company near Wilmington, Delaware.

Thus established, he augmented his staff with excellent drafting, design and other personnel. Mr. Willis, a University of Pennsylvania graduate, came to the firm for the construction phase activities, and Mr. Lamdin joined in 1920, providing for the next 25 years, the excellence in design for which the office became widely known.

For the next eight to ten years, the firm was extremely active, designing not only scores of fine houses, but buildings for the Johns Hopkins University, schools, apartment buildings and two distinguished churches. Upon the advent of the depression at the start of the thirties, however, the office was left with practically no commissions except the very important one of converting the old City of Baltimore "asylum" into a large modern general hospital with all adjunct facilities.

Faced with major expenses to produce the necessary documents, Mr. Palmer conceived the idea of bringing four younger men into the office, as associates, on a share of profit basis. Though the sharing was painfully thin initially, conditions improved and the younger group brought in and designed work of their own. Upon this country's entry into World War II, the younger men left for military service. Again, work was scarce but the office survived.

Under Mr. Palmer’s guidance, the controlled development of Roland Park, Guilford and Homeland became a reality. He was a pioneer in instituting the "restricted development" which protected the site, the environment, and the architectural integrity of the area by requiring quality architectural and site restrictions for the design and location of all buildings within the development.

Palmer was instrumental in the planned housing development at Dundalk for Bethlehem Steel in 1917, and the community of Wawasset Park near Wilmington, Delaware in 1918. In 1930, he surveyed the existing conditions and physical facilities at the old Bayview Asylum for the City of Baltimore. His report resulted in modern and free medical care for the people of Baltimore.